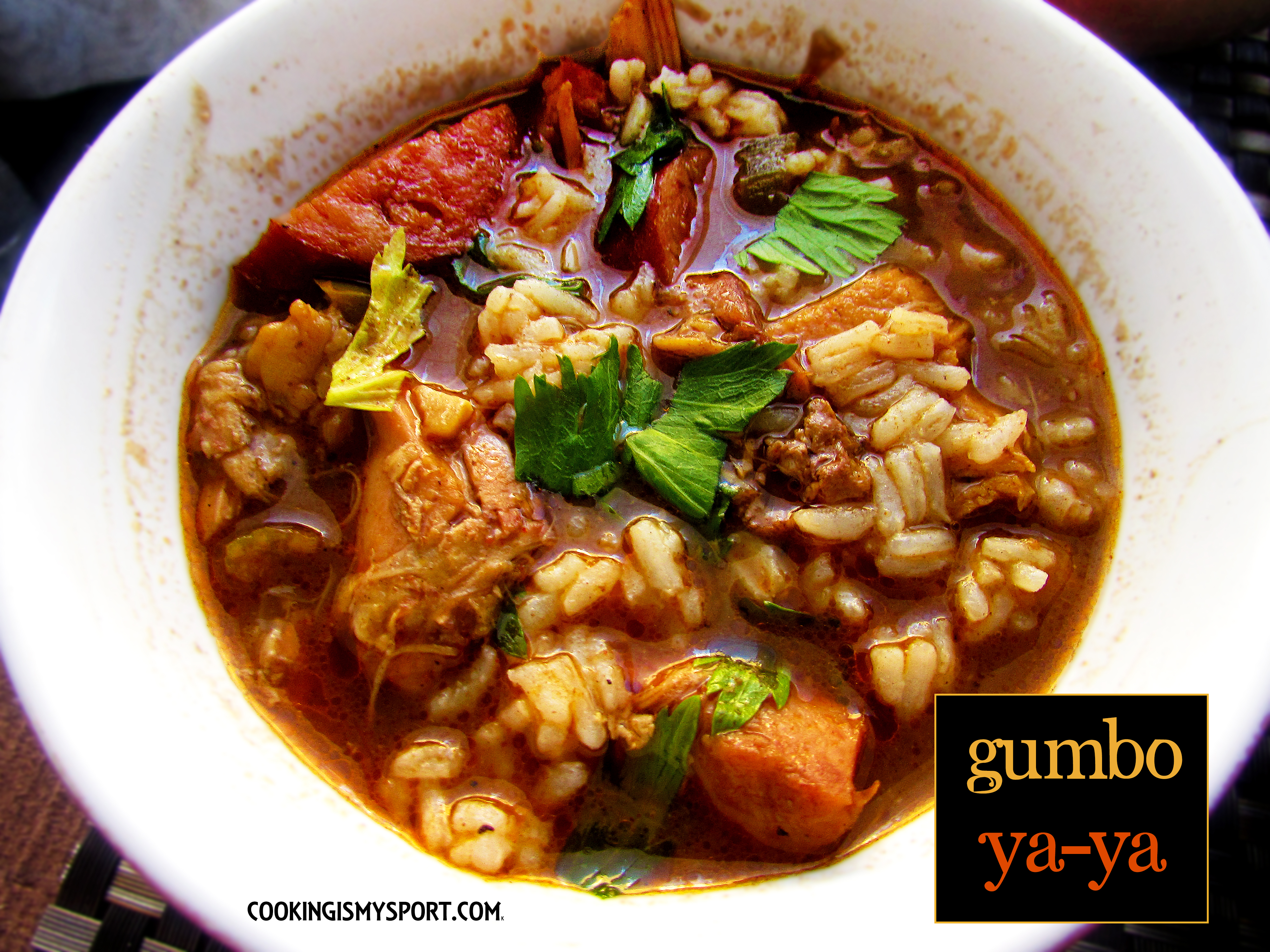 And speaking of food, another disclosure: until now, I’ve never even cooked or had real gumbo before. That one, I’ll concede is a bit more serious. I’ve made Jambalaya several times before, but gumbo was something I hadn’t tackled. I wouldn’t even order it in a restaurant if it was on the menu. Why? 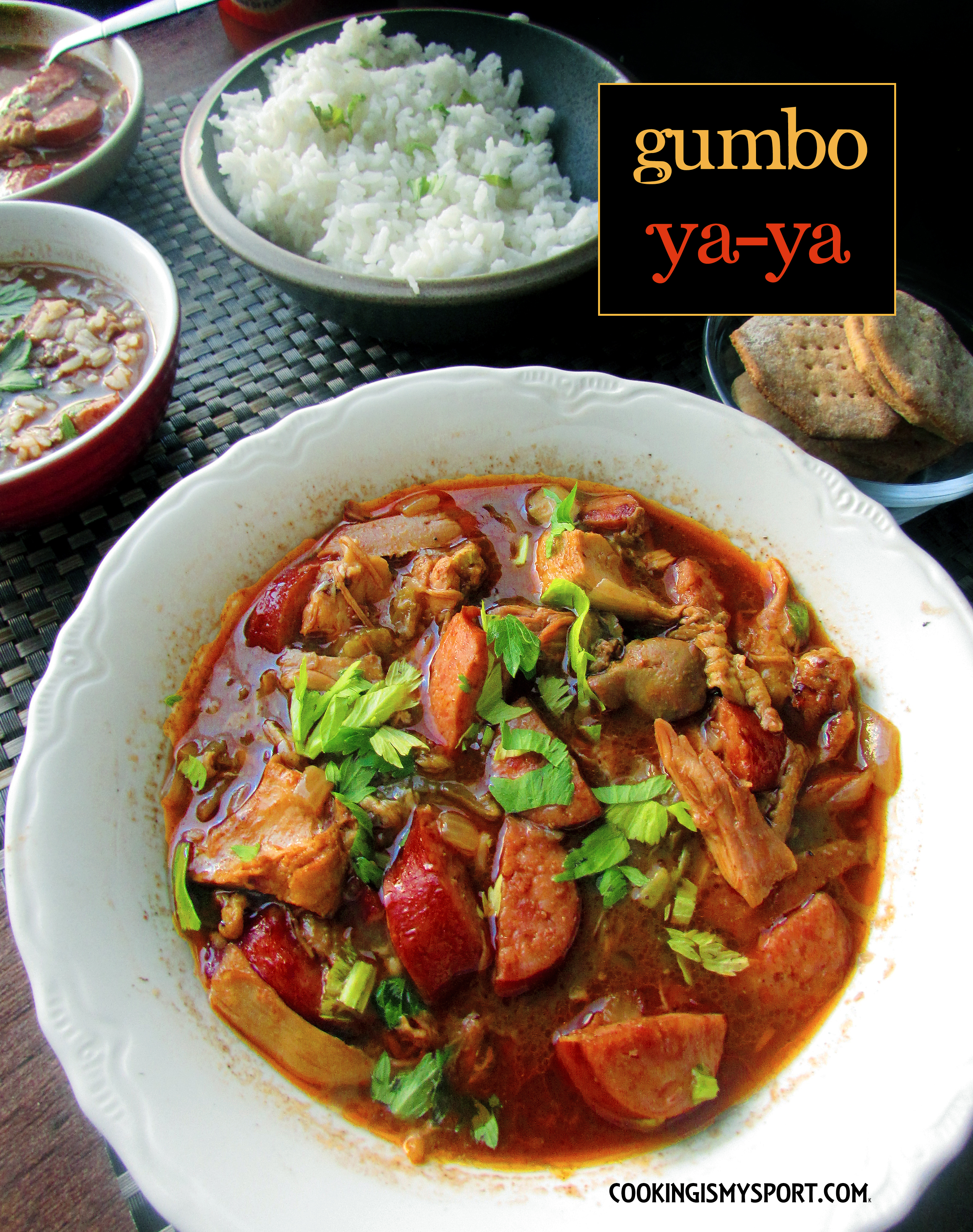 Actually, false. I don’t not like okra. I kinda hate it. A lot.

I know. But it’s true. I just can’t get with that gelatinous inner texture. Triggers my gag reflex. And since just about everyone cooks gumbo with okra, I just steered clear of it. Not because I didn’t think I wouldn’t like the rest of the stew that is the dish itself. I always knew that when made correctly, it was probably delicious. I just didn’t want it with that darn okra inside.

This year though, it finally hit me: if I was so curious about gumbo, why not just make it for myself WITHOUT the okra? 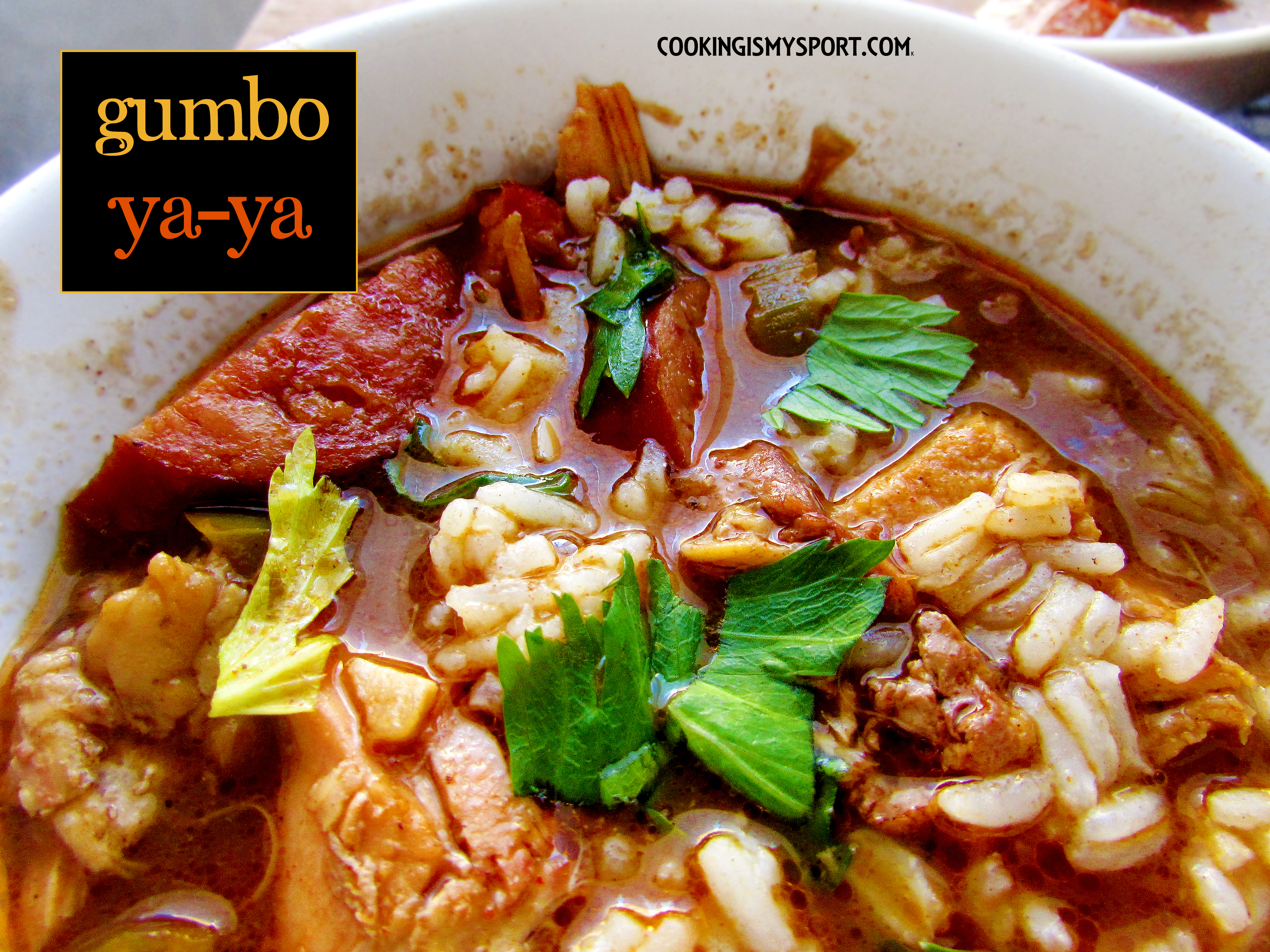 Gumbo purists who believe gumbo isn’t gumbo without okra may want to just stop reading right here and move along. Personally I don’t recommend it, as this stuff I’m peddling today is damn tasty with or without your funky okra, but hey, it’s your world.

In my view, as long as your gumbo has a delicious base of well-seasoned broth and meat, then it’s still a gumbo worth trying. This one has both, mainly because it’s a genuine from scratch process from start to finish. That’s right, Buttercup: not only are we starting out with fresh meat, we’re making our own chicken broth. 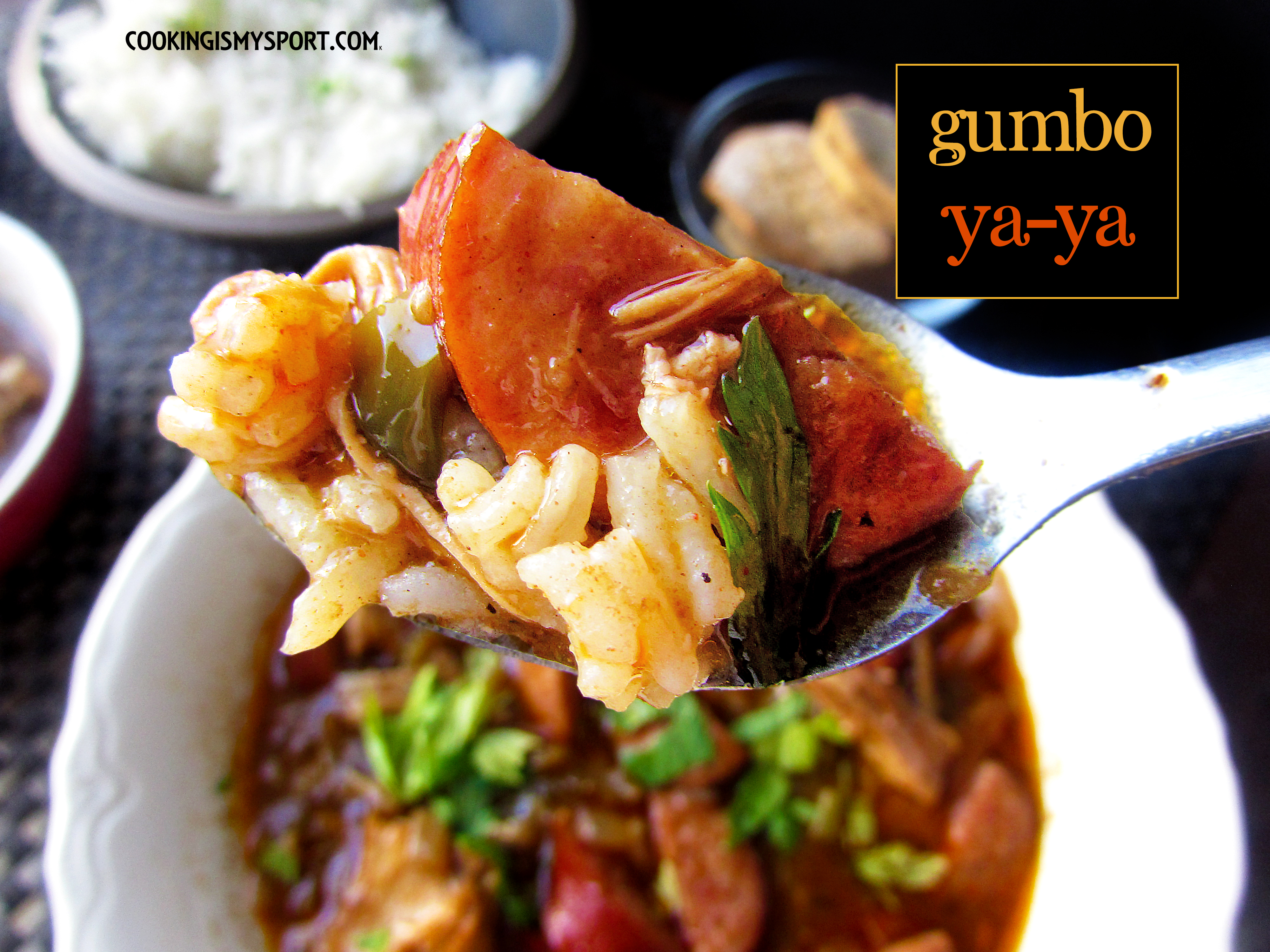 Don’t freak out. It’s not that serious, I swear it’s not. Making chicken broth is simple; you throw a whole bird in a stock pot with some water, herbs and veggies, and as the saying goes, set it and forget it for a while. It’s an extra step, but you’d be surprised the difference it makes, especially in a dish like gumbo where the broth is so essential to its success.

The only other laborious part of making gumbo is the roux: the flour-oil mixture you make that serves as both a slight thickener and a flavor booster. So long as you stay attentive to it, keeping a watchful eye AND a regularly stirring hand, it should turn out fine. After that, you’re pretty much done doing ‘work’. Just dump in your broth, spices and veggies and let that sucka go until the flavors have melded and it tastes like money. 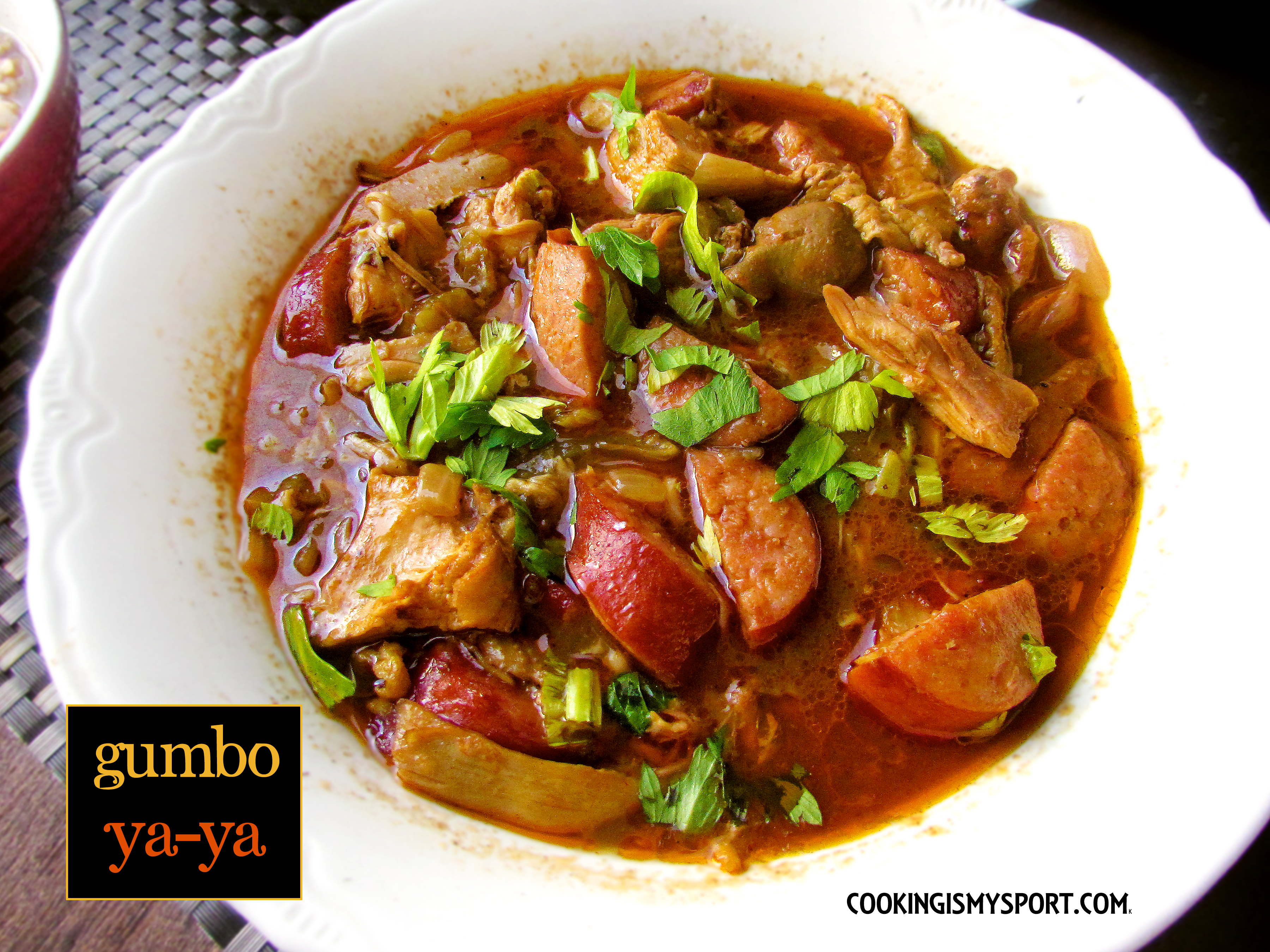 We’re huge meat lovers ’round here, so I not only had the chicken from the scratch-made broth, but smoked andouille and smoked turkey sausage in my gumbo as well. The flavor that the sausage adds is pretty much everything. Don’t leave at least one type out. As for the rest, I know that gumbo proteins can range from chicken, sausage, shrimp or even crawfish. All of these would be delicious in this; just add the meat towards the end so that it doesn’t overcook in the time it takes for the gumbo flavor to develop in the broth. As for veggies, well…I’m gonna just recommend that you do what works for you. That means if you like okra, throw it in. If you’re like me and you don’t, forget about it. If there’s another veggie that tickles your fancy, I’d say go ahead and throw it in there too. This is for Mardi Gras. Who cares about rules? Laissez les bon temps rouler, eh?

Oh! But please, PLEASE don’t leave out the scoop of rice on top. That part I must insist on.

Linking this up to Fiesta Friday #159, co-hosted this week by Zeba @ Food For The Soul and Jhuls @ The Not So Creative Cook. Y’all be easy.

In a large heavy stockpot, place the chicken, water, the quartered onions, celery ribs, 2 bay leaves, 1 tablespoon of salt and 1 teaspoon of the cayenne pepper together. Bring to a boil, then reduce the heat to a low simmer. Partially cover and allow to cook for about 2 hours, until the chicken is tender.

Remove the chicken from the pot, place on a plate or in a bowl and cover with aluminum foil until cool enough to handle. Strain the broth and allow to cool.

In a large pot or a Dutch oven, pour about 2 tsp vegetable oil and add the onions and bell peppers, cooking until they are softened and slightly translucent. Remove the veggies to a small bowl, and saute the sausage until slightly browned on both sides. Remove the sausage to another small bowl and set aside. Do not drain off the grease from the pot.

In the same pot, combine the vegetable oil and all purpose flour over medium heat. Stir constantly with a wooden spoon to make a roux until the mixture has thickened and is the color of milk chocolate, about 15-20 minutes. (Don’t walk away from it, roux can burn VERY easily.) Add the veggies, garlic, smoked paprika, cumin, coriander, remaining 2 bay leaves, remaining salt and cayenne and the Worcestershire sauce. Pour in the strained broth, stir and bring to a boil. Reduce heat to medium and allow to cook for about 1 1/2 hours, tasting and adjusting for seasoning.

Remove the chicken meat from the bones and roughly chop, then set aside. Discard the carcass. Place the chicken and sausage into the gumbo broth and allow to cook for about 15-20 minutes. Take off the heat and use a wide spoon to skim the fat off the surface. Sprinkle with the green onions and parsley and eat with crusty bread, or over rice.